"All my friends would say, 'Courtney's copying,' and I'd say, 'No way, not Courtney, she's my best friend!' " -Kat Bjelland 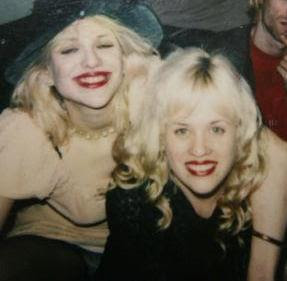 Looking at the picture above of Courtney Love and Kat Bjelland there is an unmistakable resemblance to be seen...the platinum blond hair, the pale skin, the brilliant flash of red lipstick, and the textures of two thrifted dresses, but more than the physicality its a lovely photo of two best friends that appear to be genuinely happy. 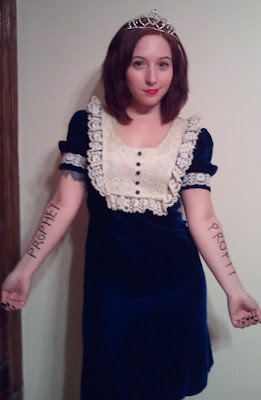 I decided to break out one of my favorite kinderwhore dresses for old time's sake along with a very antique tiara (whose previous owner received it as Homecoming Queen in 1935!), and some good old-fashioned "writing on the arms" as the ultimate photographic accessory! Historically, I didn't go for the "slut", "whore", or "rape" that other Riot Grrrls wrote on themselves...just made me cringe...as a linguistics lover the homonym always appealed to me! Also, I never really bought into the reclamation of those words as being positive...sort of reminds me of a certain word that the Caucasians are never supposed to say, and to quote Carl Pope Jr. "The Use of the "A" instead of the "ER" changes everything!". Holy guacamole! Doesn't it though! 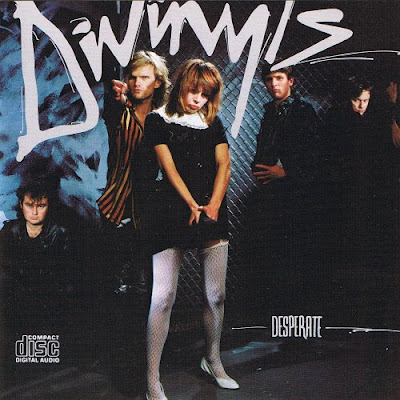 Getting back to the Kinderwhore War I always loved how Courtney admitted that she ripped off the look from Christina Amphlett (above) while remaining positively possessive about being the owner of the style during the early 90's. In the infamous Vanity Fair article the got Frances Bean temporarily snatched away from the Cobains, Courtney was quoted as saying:

"Kat has stolen a lot from me...dresses, lyrics, riffs, guitars, shoes. She even went after Kurt. That was the last straw. Because I put up with the lyrics stealing. And I put up with her going to England first in the dress that I loaned her. Now I can't wear those fucking dresses in England anymore!"

We all see how completely bananas that statement is, right? Courtney admits that she loaned the dress to Kat, and then didn't think bitch was gonna wear it? Like its a pajama dress or something?! I mean, I totally related as a teenager when you live and die for your identity and where friendships are so intense that it's extraordinarily easy to enter into the "frenemy" zone. I myself, had a bestie at one time that was equally as obsessed with Courtney and Co. as I was and we both began to collect clippings and vintage dresses during PI (that's pre-internet). That's right..no ebay. No hipster website run by girls wearing "Rapist Glasses" and the entire American Apparel wholesale catalog.

Once we ended up finding a long sleeve blue velvet dress from the 60s with a lace bib, lace ruffle at the sleeves, and tiny blue buttons down the chest. In other words, the perfect kinderwhore dress...and true to the Judgment of Solomon neither one of us had enough money to buy the dress...unless we put out money together! The shared dress ultimately became the symbol of the dissolution to our friendship, and the longer it went back and forth between us the more we both realized that there could only be one Babydoll look-a-like in our high school!

Kathi Wilcox of Bikini Kill (L) and Christina Billotte of Slant 6(R)
So...there was time, during the early nineties, that grievances seemed to be best aired and dealt with on the answering machine, and then without fail end up sampled on records as the eternal reminder of whatever temper tantrum the person had at the moment. Answering machine rants had to have something to do with the rising popularity of spoken word, which occurred around the same time in the scene, because that's the only logical reason why someone would leave seemingly permanent evidence of themselves being bat-shit crazy.
One of my favorite messages was left on Kim Shattuck's machine, and can be heard here, in which Courtney Love addresses the "kinderwhore" debate. The Muffs later went on to name one of their albums, "Blonder & Blonder" in reference to Courtney's alleged dis on Kim and the insinuation that once again someone was stealing Court's mad steez. Kathi Wilcox (above left) invoked the kinderwhore style during the early days of Bikini Kill, but seemed to shift away from the vintage babydoll look as soon as the rivalry between CLove and the Riot Grrrl scene emerged. It may have something to do with this sassy quote:
"I saw this little riot grrrl in Spin who was holding a little magazine called Princess. She's 15, but everything in her little riot grrrl world - like Hello Kitty products - is telling her to act like she's seven. That's not feminism, it's cultural anorexia." -Courtney Love
I'd actually like to see this picture Courtney is referring to because I had a zine called "Princess", and I definitely looked like a Sanrio addict that got crazy with the black marker. Anyway...there was a palpable schism within the riot grrrl community over whether or not you could or should support Courtney Love/Hole since there was obvious beef between her and Bikini Kill and okay, well EVERYBODY. Could it have been as simple as the fact that Tobi Vail (BK's drummer) was the ex-girlfriend of Kurt Cobain? Or was it because as much as Courtney critiqued a patriarchal society it was always terribly apparent that it was one that she wanted desperately to fit into. We all know the reasons why people bully others, but in Courtney's case it was still hard not to cheer on the underdog. 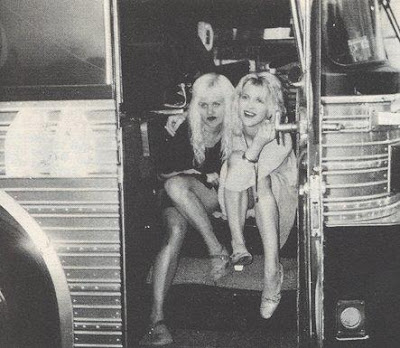 Love and Bjelland on the steps of the Babes in Toyland Lollapalooza Tour Bus
What started as passive-aggressive gossip in an insular independent music scene between mutual friends soon became accusations in print from Vanity Fair to Neal Karlen's book written while following Babes after being signed to Warner Bros. Karlen's book has an understood slant toward Bjelland's version of who started the babydoll trend and characterized the rivalry as the "War of the Schmatte", after the filming of the music video for "Bruise Violet" which featured artist Cindy Sherman as Kat's evil Doppelgänger (a not so subtle allusion to Courtney Love) whom she strangles in the end. The completion of the music video, which was assumed to endow Kat as the originator of the Kinderwhore look in the collective consciousness of MTV viewers, was only shown a few times on the late-night alternative rock show 120 Minutes, and received a 20 second critique on Beavis and Butthead. 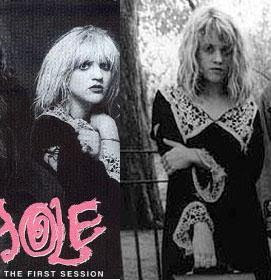 Courtney's version of the rivalry was much more intrinsic to the ambition and success that she felt Kat was having through the use of this schtick, and not necessarily having another female have similar stylistic leanings. There was a direct relationship to the time in which it suddenly became unacceptable for two Carroll Baker twins to exist, and it was coincidentally when Babes in Toyland released Spanking Machine and began to tour Europe with indie wunderkinds, Sonic Youth. In Poppy Z. Brite's book, "Courtney Love: The Real Story" Courtney references the Karlen book by stating:

"I felt molested and stolen from constantly and it wasn't until a female friend not only wrote about me, but also took some of my own persona from me. Kat took this and created her own world with it. It really moved me to get off my ass and do it myself. I thank her."

Through this account it is clear that the origin of Courtney's accusations stem from another female gaining popularity and credibility in a scene while also being a more naturally patriarchal standard of beauty than Courtney was during this time. When Courtney eventually married the Deity of Alternative Rock, its no wonder that people assumed it was the ultimate career move, and after the marriage the War of the Schmatte suddenly became obsolete, in that, interest in Love catapulted her into a truly public eye as the new Mrs. Cobain. 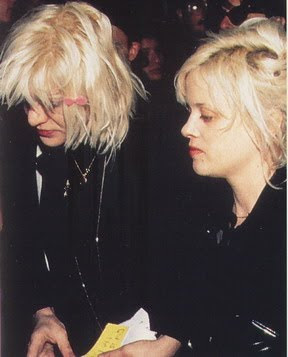 In the end, the one person who immediately flew to Seattle to be by Courtney's side after Kurt Cobain's suicide was her rival/best friend Kat, and in Courtney's time of grief it appeared that there was no other person that she would have rather shared a black dress with at that moment than her friend.
Posted by Nicole at 11:04 AM 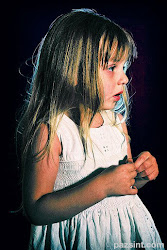 Close to my heart